skip to main | skip to sidebar

William's Day at the Nature Park

feeding the geese
On Memorial Day we went to a nature park near our home. We had such a good time! It was so much fun to watch William, with all of the new sights and sounds he is now able to hear and see! I lost count of the number of times he heard something new and pointed to his ear and said, "Oooh?" That's his, "What?" It's his cue for me to go point out what the new sound is. 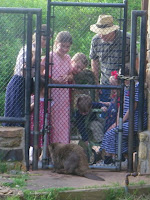 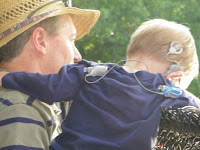 William loved the beaver! He kept patting his leg and trying to call it over to him. It was so cute! 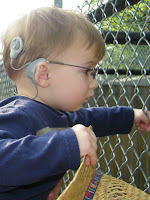 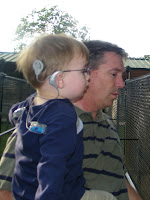 He also had a great time talking to the coyote. Michael would make a coyote sound, then William would repeat it back, then the coyote would start in howling, too! It was hilarious! The girls got a little video of it that they posted on their blog - www.sendingoutarrows.blogspot.com - it's kind of hard to tell with all of the howling who is who, but you can hear all three of them! 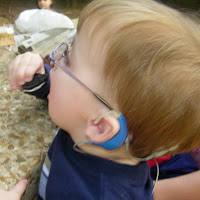 William enjoyed his first oreo cookie - well, half of it anyway. After he ate the first half, he carried the second half around in his hand for a good while. I ended up taking it from him after I felt it was not edible anymore. He wasn't very happy with me! 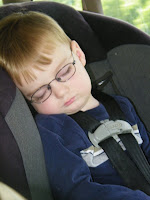 This picture is actually on the way to the nature park. I think it is so cute! William likes his new glasses so much - he wants to wear them all the time!
P.S. In case any of you are wondering why on earth we would dress our sweet little boy in long sleeves and pants at the end of May, it's because the poor child is severely allergic to mosquitoes! And chemicals (bug spray)! For his comfort though, we did wait until later in the day to go, when it was cooler.
"For the invisible things of Him from the creation of the world are clearly seen, being understood by the things that are made, even His eternal power and Godhead; so that they are without excuse:" Romans 1:20
Posted by CAUSE ME TO HEAR at 9:40 AM

CAUSE ME TO HEAR
What began as updates of William's daily life as seen through the eyes of his mother: about deafness and learning to hear with cochlear implants, blindness, breathing issues, mobility, and more...became one family learning to walk through their deepest sorrow when William flew home to heaven on October 18, 2015. 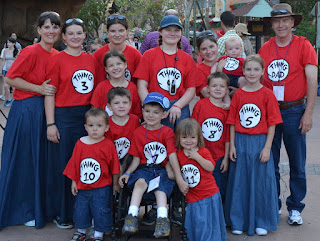 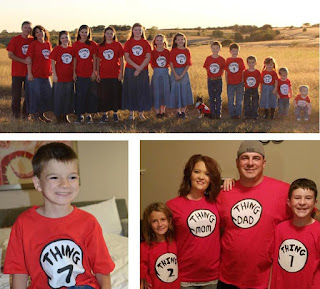